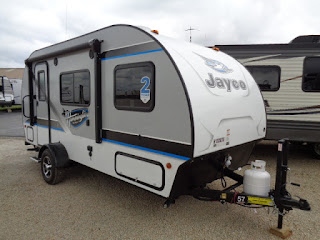 Note, this is a used RV and some features may or may not apply to the model you're considering. The list price is about $25,000 new, but a good used example can go for less than half that amount. This one came with the usual wear and tear and received a bit more on the trip we took with it. This trailer does have electric brakes, so a brake controller is necessary for safe and legal operation. Although this came with all of the locks keyed alike, corrosion necessitated the replacement of one of them. This trailer came with a new battery, a cord, a drawbar and a package of black water treatment from the last owner (how nice). The batteries to all three remotes were dead on arrival, and the black water tank still had some surprises (yummy). We also ended up having to temporarily bypass a clearance light that shorted out before it cut short our vacation.

I would recommend using Aqua Chem in the black water tank over the orange, lavender, or other scented packets that do little in my experience to break down the waste or deal with the odor. Our bathroom ended up smelling pretty bad after a day of using the wrong treatment. The correct use of the facilities would have also helped; this is not a fault of the camper or equipment. Nothing earth shattering here, but being prepared is part of planning any vacation, and camping requires a lot of preparation and patience. RV toilet paper is the only TP you should use here and note that less is more and more will close the passageway from the toilet to the tank.

The nomenclature 17RB means 17 feet for the coach and a rear bathroom. The entire trailer is 19 feet 9 inches long and weighs about 3000 pounds dry weight. The hummingbird is the smallest model in the jayco lineup (the 10RK or rear kitchen is the smallest submodel). It comes with a single 20 pound propane tank, a propane/110V refrigerator, a microwave/convection oven, 6 gallon water heater that uses electric or propane, a full bathroom, air conditioning (a godsend this last week) vent fan, two burner stove, a sink as well as a radio/DVD/Bluetooth/CD player with inside and outside speakers and a TV installed. A TV can also be installed outside as well. This camper also has a slideout for the kitchen and a power awning with LED lights you can change the color. The 2016 models only came with blue lights, but this was a change for 2017.  The appeal of this model was that it was feature packed like the bigger models in a more manageable package. I've had no issue towing or parking this beast. It tows very well, but can be jumpy on southern Michigan's moonscape of moribund motorways, especially I-69, where it would be a slight exaggeration to say there is an expansion joint every five feet. Once we were north, it was very smooth towing.

Setup at the site was the usual and nothing remarkable for any travel trailer. The built in jacks required some effort to get down and the jack to the trailer tongue was equally tiresome. My advice is to use a 3/4 socket and driver for the jacks and upgrading to a power unit for the tongue. The awning and slideout were easy to use with minimal noise. The A/C was slightly noisy but very efficient. The refrigerator keeps its cool. but does take a few hours to get that way. We didn't attempt to tow with it on to avoid fire hazards, but some have complained about the operation when towing. My advice is to use a cooler or plug the unit in and then disconnect for the trip. It keep our stuff cold for three plus hours. The electrical is clear and well laid out, but the manual seems to be clueless on almost everything. This was very apparent when my wife tripped the GFCI with her inane hairdryer. It took me a good 15 minutes to track down the problem and deal with it.

The vent fan is very puzzling and a chore to operate. I would have stuck with something less complicated such as a manual operation of the door and a simple on and off and reversal of the fan motor. The light switch also has to be in the on position for this to operate at all. Another PITA is the entry/screen door. Rather than use a knob that requires ONE hand, this one makes you use TWO HANDS to close the infernal thing. I understand this is an industry standard, but being able to close the door quickly is important when camping in areas inundated with mosquitoes and flies. With some practice and coordination, I was able to close the door one handed with relative ease. My wife still struggles to close the door from the inside.

The TV, radio/DVD are pretty simple and straightforward to operate as is the light setup outside. This whole trailer is very well lit with a light in the basement storage areas. The aft has enough room for a few blocks, while there is more in the fore compartment. There is plenty of nooks and crannies to store camping supplies, food, the remotes and your devices. There are also plenty of places to plug them all in. One minor gripe is the lack of a net on the fore side of the camper next to the bed as well as a usb port and outlet to plug in a phone. This seems like it would help the person sleeping forward from disturbing his or her partner, but it's so minor and easy to fix.

In such an RV, space is at a premium, but the size of the bathroom rivals some $100,000 houses. It's pretty big on this model, but the shower is a bit on the small side and meant for occasional use during the trip, if at all. Better off going to the shower room or using the outside shower if you can secure some privacy first. Both sinks are very functional with residential grade faucets, with cold and hot running water  The toilet is a standard RV fare that requires some patience and forethought to use. Using the black water flush on the outside of the coach is in my opinion a waste of time. Better to use a standard hose with a handle at the dump station and clean from the toilet itself. Otherwise the result could be a nasty surprise at home trying to flush out a black water tank with a drain pan and a garden hose (gross).

The convection/microwave takes some figuring out to use, but is very capable and also frees up space under the cooktop for more storage. The cooktop, as in days of old still requires a lighter ignite. It's at least more reliable than an automatic pilot, but is a bit out of place on such a high tech camper. There is also a gas grill connection on the outside we didn't utilize at the right rear of the coach, but it's far more convenient to pack a camping stove you can park anywhere on the site.  I've you're stuck on the inside, the slideout (which is mandatory to slide out to use) provides more utility and functionality to the inside. There is not enough room for two people to pass through the hall unless they are unusually small.  This camper sleeps three or four if they don't mind close quarters. This is a necessary compromise if you have something smaller than a 3/4 ton truck to pull a travel trailer with.

Towing this beast with a minivan  such as a Honda Odyssey or mid sized suv such as a Chevy Traverse is more than possible, but I would upgrade to a weight distributing set up as well as adding a sway control to the rig. These will make it a lot more manageable on rough roads and crosswinds. The narrow profile makes using towing mirrors unnecessary, but check your locals laws. Even with the aerodynamics, expect your gas mileage to drop significantly if you use the aforementioned sized tow vehicles. Anything smaller would probably not be a good idea to use for this camper; stick with a Scamp or pop up.

In short, the Hummingbird is screwed together pretty well. It lacks some refinement found in the Rpod and some innovations found in other brands. Jayco sticks with tried and true while adding all the modern conveniences and features found in their larger siblings. As with any camper of this size, space is limited, but things are efficiently laid out. Those wanting more sleep space will want FD (Front dining) or BH (Bunk House) models as these sleep more people than the RB (Rear bath) RK (rear kitchen), MRB or MBS models. The latter two only sleep two and M stand for murphy bed.

If bathroom space is something you want, and you want to sleep three people, the 17 RB is worth a look. Either way, I would buy this used and get an inspection before buying. These cost about $25,000 USD new and sell for half that after a year or two. Reliability isn't guaranteed and even new RVs are going to require impromptu repairs.  I would recommend at least a 1/2 or 3/4 ton truck to tow this more easily. A minivan or mid-sized SUV can tow it, but a truck is a whole lot better if you can swing it. Maranatha!