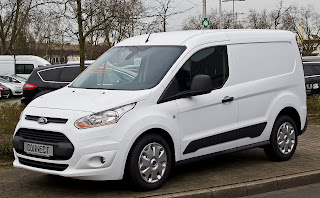 This is concerning the current generation, 2014 to 2018 of compact cargo vans in North America. The 2019 TC is shedding the double grille in favor of Ford's Aston Martin looking piehole and adding a diesel engine to the mix. Other than that, few changes are coming or needed. As a technician who drove a diesel van for almost a year, I can't vouch for the ease of starting and running these.  The van I drove was a Ford E250 that belched smoke, wouldn't start and drove like a wheelbarrow full of rocks, Ahem! I would stick with the gasoline model myself. Fortunately, Ford has done the right thing and modernized their vans for the working man.

The first Transit Connect imported into the United States was a big box on wheels. It was reasonably quiet and refined with a four cylinder engine and more than enough power and torque to carry ladders and light bulbs. It was also well thought out and easy getting in and out of.

The current TC builds on this with an even more modern, even sporty styling reflective of the focus platform this vehicle uses. The current engine choices are a 1.6L Ecoboost or 2.5L Duratec four cylinder. The van has has the 2.5L, which is the engine this writer would strongly recommend for durability. Turbos require more frequent oil changes and should be idled before shutting the engine off to prevent the oil from coking up inside. Considering the crammed engine compartments on today's vehicles, adding more accountraments isn't going to help with that. All examples have a six speed automatic transmission. You can expect 20 to 24 miles to the gallon in mixed driving with the van loaded. Most of the the time owner operators will load these with shelves, tools and parts.

Getting into and out of this almost requires a step down to get in, but the roof is very high which gives you plenty of room without tucking your chin into your breastbone. The ride is very car-like and because of its small size is VERY easy to park and maneuver. A backup camera should be mandatory if there are no back windows. The ride on Michigan's moonscape of roads is choppy. However, nothing short of a hovercraft is going to have a smooth ride here.  Other than that, cabin noise is minimal save what you load it with.

The dashboard is typical Ford fare: busy, convoluted but most of the instruments are easy to read, with the exception of taller drivers not being able to see the shift indicator on the dash due to the silly protrusion over the gauge cluster. The letters on the shift lever are confusing and don't line up well with the lever itself, so they aren't much help. Forward visibility is good, and sides are a bit tricky as with any cargo van. Rear visibility is poor to non-existent. Seats are comfortable with decent thigh and back support.  Vinyl seats are a good idea.

The cab has plenty of pockets, and an overhead storage bin to keep things organized. This is something the American style vans will never have. All these have are pockets in the doors that allow everything to get wet. There's a glove box and a bin in the console as well. The cupholders are car style in the console.

This model has barn style doors in the rear, which is recommended for any van you use for work. You can also lock them into position for windy days or if you're parked on an incline.

These are available with or without the driver's side sliding door, which is recommended for more ease of use. The extended high roof version is also recommended because most service techs will load more than they think they will. With some careful planning, the room will be more than adequate for parts and tools. Whether you're repairing furnaces, air conditioners or appliances, these vans will work well. If you're installing HVAC, a plumber or electrician, you may want to stick with a Ford Transit, Ram Promaster, or a box truck. The truth is most can keep an adequate amount of supplies in this as you can a larger van, provided both are organized and things are not scattered all over the floor. The bonus with this one is that you don't have to climb inside to reach tools or parts and can get to them much quicker. This is without having to worry about a load floor, much less step up into it.

If you're looking for a small, efficient cargo van. The Ford Transit Connect is a good choice.