A week and a half ago, I went underneath to see about adding a trailer hitch to the little guy. Since the truck was gone and with it the hitch and wiring (not that it would fit) this was not something this writer was looking forward to one bit. Still, a trailer hitch would give this car some much needed capacity for a lot less money than buying a bigger vehicle. Since the frame was encrusted with rust, I used a ball peen hammer to chip the crusty stuff loose and get this down to good metal. 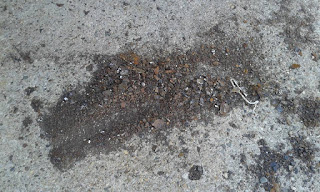 This is about a third of what came off the car. I could literally put my hands through the sheetmetal under the bumper mounts. 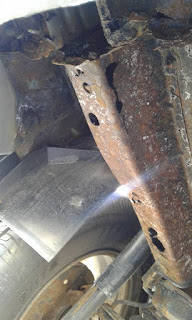 This is what the left frame rail looked like once I got done chipping the loose rust off. That crack goes over six inches. This is where the trailer hitch was supposed to bolt on. Not today. If your car is over five or six years old, it's a good idea to check it for rust. Ford Escapes are very prone to this kind of destruction, especially in states and provinces where Calcium Chloride (road salt) is used to deice and reduce dust on roads,  Michigan doesn't have inspection laws to date, but this kind of rust is a danger just the same. I used a small hammer and if it breaks through like this, the car needs to be scrapped. Mine is probably there right now.

Last weekend, I had to replace the car with a newer one. A 2010 Ford Escape to be exact. I'll be doing a review and report on that soon. Maranatha!
Posted by Walter Grace at 6:54 PM