This is review on a USED vehicle with 86,000 miles as of this writing.  It will only be useful for the vehicle reviewed and not on the new generations of the Ford Escape, which had a redo in the late 2000's and became a completely different model marketed to a completely different demographic group in the early 2000 teens. Your mileage can and will vary as this is a V-6, four wheel drive equipped vehicle. The radio, a six dish CD changer was not operating as of this writing, so a used aftermarket radio/CD/MP3 player was substituted and will not be included in this review. Ford audio systems, when in working order have usually been pretty decent in cars of this vintage though. Everything works on this example save the rear defogger and washer to the rear window.

The Ford Escape was and still is less about being a truck and more about being what a small car should be; having a small footprint and have a goodly amount of headroom, hip room and leg room. It should also be well thought out to maximize space and functionality in said footprint. The Ford Escape does this par-excellence. The silhouette is boxy by today's standard of raked windshields, free form glass, and lower, rounded roof lines. As a six foot, 200 pound plus man, I can get into this vehicle without ducking under an A pillar that arches into the B pillar. This is a move that requires the deftness and flexibility of a gymnast. This is a maneuver that a forty-something repair technician is not capable of.

In the fact the interior is well-laid out in typical Ford-ish fashion. The overdrive off switch is on the end of the gear selector, which is on the steering column. Wiper controls are in front of said gear selector, while the turn signal slash light switch slash dimmer resides on the left. Wiper controls are a bit on the need to practice side, while the switches for the fog lights, hazards, instrument light dimmer, and hazardss are in user friendly positions. The four wheel drive selector is also conveniently located, if not lighted. The controls for the dome light and map lights are in an impossible to get at spot, more in reach for the rear seat passengers. Map lights on the mirror would have a much better idea as would automatic lighting controls ala-General Motors. Lighting on the heater and radio controls is good, while the speedometer binnacle is dimly lit and the cruise control buttons on the steering wheel aren't even lit at all. Removing the cluster and the green plastic sheathing from four of the bulbs helped the lighting situation in the binnacle greatly, as did replacing the burnt-out bulb for the transmission indicator/ odometer with an LED bulb. The rest of the cluster is not compatible with LED's at all as the light will refract in ways the manufacturer could have never anticipated, making the cluster nearly unreadable. The dome lights DID benefit from LED lights, even though these have a tendency to stay glowing even after they are turned off.

Seats are very supportive and shorter drivers will appreciate the lower dash, lower distance from the seat to the floor while taller driver will appreciate the high roof line and squarish build. Visibility is superb, but a back up camera would be a great idea to install for safety's sake. The rear seats fold flat, but this requires removing the headrests, flipping the lower cushions forward and up, and then flipping the seat backs forward. There's plenty of room for tools, a water heater, maybe even a few sets of skis, but not a 4x8 sheet of plywood. The liftgate has a separate glass that you can lift up, but in practice you may not even need it as the gate is pretty convenient in its own rite. Another nice feature, unlike many mid-sized and large sport utility vehicles is that the spare is accessible from the inside. While this is a bit more of headache with a full load of groceries, it's still a helluva lot better than fighting a tire winch in the middle of a dirt road after a rain; not to mention ponying up two or three bills for a new one when it inevitably breaks. Even worse the thought of a 40 pound tire coming loose and hitting the windshield of the vehicle in front of you. 'nuff said.  The next part is going to be about actually driving this thing, while the last part will be about maintenance. Thanks for putting up with me, and more to come. Maranatha! 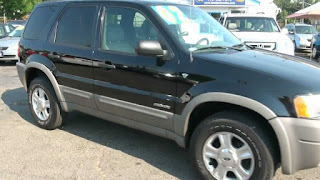