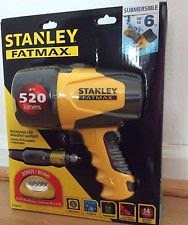 Fixing appliances requires you to be able to see what you're working on and this is an understatement. I work in dark basements, laundry rooms, even kitchens trying to find broken parts, leaks, even shutoff valves. Even in  the best lit of venues, you will have to look inside a dark appliance and will need to see things clearly to avoid touching a live wire, a hot element or moving part. All of these can end your workday at the speed of fright.
Over the years, I've become quite the connoisseur of flashlights. Maglites have been the mainstay of this madman's collection as long as they don't get lost in a customer's basement or crushed in a dead car (long story). However, these are either too bulky for the big ones, and sometimes not bright enough for the minis. I spend about $10 a month on batteries to keep the lights on. So the thought of a rechargeable mini spotlight that I could work on appliances, autos and that occasional frozen pipe under the house is tempting. My eyes aren't the greatest for reading small print on appliances, so more light helps these to stand out.

I got this light late in December as a "Christmas" present and the price is about $30 to $40 depending on whether or not you get it on sale. It comes with a 110v and a 12v charger for your car. The model I got did not come with the headlamp as depicted above, but the rest was exactly the same. The light is supposed to be 520 lumens or candlepower as it used to be called, which is about bright as a car headlight. There is also a power saving mode that extends the battery charge, which is supposed to last up to ten hours. In truth, the power saving mode significantly cuts light output that would make a penlight seem superior. The light output at full power is more than adequate when replacing the alternator in my car, or looking for a leak in an ancient washing machine. When the battery power gets low, the light beeps and abruptly goes off.

Which is often as the battery seldom lasts more than two hours. Even though the light is probably at 520 lumens as advertised, the way the lens spreads the light (this is a spotlight after all) means that less light will be pinpointed on that model number than the average mini Maglight. Charging the light takes time, especially with the vehicle charger and even with frequent charges, the battery seems to call it quits at the most inopportune times. What's more is that the light will not come on when the battery is charging. If it goes out when changing a tire or trying to find a leak, remembering to bring the charger will not bail out you out.

My assessment on this light is for my purposes, it's going to help if you have one job that won't take long to do. If you need something that's going to stay on for quite a while, or need to get back in action quickly, this is a good one to pass over. I can change the batteries in my mini Maglight quickly enough, but waiting several hours for a light to charge is not an option in my line of work. I may relegate this to home or camping use for the foreseeable future unless I can figure out a routine to make this usable for work. The size and light output are phenomenal, but "up to 10 hours of run time" is slightly misleading. If you had this in low power all the time, maybe, but to use this for the intended purpose you're going to need to recharge it much much sooner. Maranatha!
Posted by Walter Grace at 8:23 PM