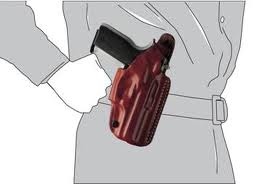 Before I begin this review, this is not the place to debate gun laws.  This writer believes it is a right of decent people to own and use in self defense as well as sporting purposes. It is also spelled out quite clearly in the Second Amendment of the U.S. Constitution, the Bill of Rights. Handguns, or any other means of lethal force should never be used except in the gravest of extremes. Follow all applicable laws concerning concealed carry to the letter and the spirit of the law. Training on safe ownership and yes use is strongly recommended.

I like my Ruger SR9c, which is one of the best striker fired guns for the money and certainly better than many other budget pieces. It's easy to shoot, has all the bells and whistles and is about $150 less expensive than a Glock 19 as of this writing. It's also slimmer and has a similar trigger, and a much better grip in my opinion. Night sights and some accessories aside, this is still a better buy. I've still been able to find 10 round magazines for less than $40, and the gun is well made and very sturdy. The grips are just slim enough to facilitate concealment, but big enough to keep the gun steady. However, after nearly four months of carrying this piece, I've come under the conclusion this isn't a very good in the waistband carry gun. Yes, it works, but so does a compact spare on an SUV. It doesn't mean that it's going to work well or is ideal. A gun pushing against someone's side is going to be uncomfortable at best. Mine was pushing against some key nerves making this a numbing situation.

A shoulder holster is something some people swear by, but isn't without its drawbacks. Imagine a brassiere weighted with two or three pounds of steel, plastic and leather and you'll get the idea. Even the usual residents of one don't weigh quite that much, and a shoulder holster tends to concentrate this in a small area on the body. This writer imagines there are those with a better weight distribution, but also have a big price tag to go with it. These also squeak and show through clothes. In addition, I have enough trouble trying to get a shirt on, much less trying to get a shoulder rig to line up. This coupled with the fact my arms get numb with too much pressure nixes this idea. Leaving the gun home is not an option either, legal and other considerations aside. A pocket gun is something I'm considering, but there compromises in accuracy and handling that must be addressed first. Trading this gun isn't an option to meet that criterion.

I went with an outside the waistband holster that fits close and is adjustable. Because of durability concerns, leather is the only choice as Kydex would bulge more and wouldn't have much yield to it. A strap was also in order as well as a tension device to keep the gun from clattering to the ground, or worse, being nabbed by a ne'r do well. The Vega N117, set up for a Glock 19 fits the Ruger SR9c perfectly with a strap and a tension device. You also have three positions to carry this outside your belt; straight up and down, a forward cant, or my favorite, with the grip pointed up with the barrel facing back. This has the added benefit of looking like a cell phone under a shirt or coat. I wore this at the grocery store and nobody so much as tossed a frown, much less called the police (I have a license to carry concealed and my state has an open carry law, but it's crazy to do it). It was also comfortable, and the gun stayed put. The leather on this is also a bit stiff, but was told that over time this will soften and be easier to use.

As for the way this is made, there's a double layer of cowhide on the back and a single layer on the front. The strap releases quickly and a quick, straight pull removes the gun. The tension device is adjustable with an Allen wrench if need be and the fit and finish is top drawer. The only drawback was that the place I bought this was out of black, so I bought a brown one. As we all know, guns and their accessories have been flying off the shelves as of late and this was a small miracle it was available at all. This holster can be had for about $52. I would also recommend a good quality leather belt and these will run about $50 to $100. These are worth it because they'll last a lifetime. I've taken to wearing Carhart myself, but there are other brands out there. Just stay away from cheaper store brand ones because they will stretch and break. Belts, shoes and holsters aren't items to go cheap on, as your life may depend on them. Maranatha!

Thanks for such a nice content. Apppreciate it :)
Cheers
If anyone interested similar one's have a look here rvguiders thank