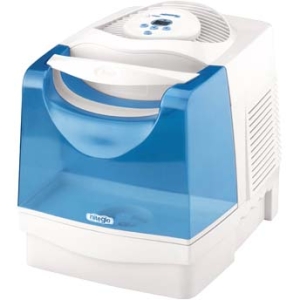 For the past few days, my boys have been getting sick with the drop in temperature. Even though the weather is breaking a bit, my older boy has gotten a bloody nose several times, including yesterday when he had to spend twenty minutes at the school nurse's office. I've got two devices to measure humidity in my trailer, both made by Aprilaire and usually come with a central humidifier, but I got mine courtesy of the salesman. Both were reading about thirty four percent relative humidity, even with the shower in the master bath with no bath fan. It was going to be a trip to the store to get this taken care of, as trailers cannot have a central humidifier due to the duct design. Naturally, my options are limited to a freestanding or maybe a steam one installed. Since I really don't want to mess with plumbing in a mobile home, the free standing was my only option. I went to Menard's to look at one, but the options and the prices were dizzying. You could spend upwards of $199 for one, with the average being well over $70. After nearly a half hour of looking at features, I got the Hunter model 34407 with the night light and the permanent wick. It's made for about 800 square feet, which is on the small side, but has brought the humidity level over forty five percent with ease. The only drawback is filling the thing several times a day, and with my faucet, can be a challenge. However, filling this at the bathtub or using a dustpan to funnel water in makes this a non issue. The tanks locks in very easily with no spillage whatsoever and the night light looks pretty cool through the water in the tank.

The controls are "child-resistant" and take a minute to adjust to. There's a water symbol for the humidity level you want, a fan one for the speed, as well as a timer (don't need it) a power button and one for the light (must be to keep from tripping over it in the night, but we have it on a desk). To change the settings, you need to hold the button until it flashes and press it incrementally each time you want to change it. In the interest of simplicity, these only go up and then start at their lowest level. Once you get used to it, this is not bad. However, the price is about $81, which is what a typical doctor's visit is or a day off work unpaid. If the price seems high, remember that central humidifiers superior as they are, can be upwards of seven times that installed. They will also use more water and in my neck of the woods water is expensive. For the price, this humidifier can't be beat and sure beats the alternative in my house, which is not having one or boiling a pan of water. Maranatha!
Posted by Walter Grace at 10:44 PM

I just got this one a week ago replacing my last one I had. The last one was in its 3rd season of use and when I went to turn the fan knob, I got a very large shock and it blew the unit. I called customer service which sent me a new one ASAP. This new one, 34407, is very loud. I also do not like the digital buttons. I prefer the dial knob. It works ok, but I have to turn it off at night as the fan is much to loud to sleep with on. (even on the lowest speed)

I've noticed this since I've had the chance to run the unit. It still work and we still use it, but next time I'll spend a little more for a better one. Thanks for the comment Joan N.