Posted by Walter Grace at 9:44 PM No comments:

As always, I'm going to keep pictures to a minimum. After getting the gun home and turning in my paperwork to the police, the officer at the desk asked me what I got. He said it was good gun and made mention something about the government and Beretta that I didn't quite get. As with any new firearm, I field strip it and lubricate it, as the factory lubricants are non existent. The slide pull is quite substantial at 16 pounds, but even with my arthritis is more than doable. Unless the safety is off, you aren't pulling it anywhere. Transitioning from the PX4, the slide lock doesn't automatically release the slide. You have to pull back to release the slide lock to get it forward; not a big deal. The manual safety is very easy to operate with your thumb and like most U.S. made pistols, goes down for fire and up for lock.

Taking the pistol apart to field strip it requires a pencil or snap cap. You have to pull back the slide and push up on the lock, push down on a lever inside the ejection port and then push out the take-down pin. You can use your finger for these, but a pencil will be much more convenient and in the case of the slide, much safer. Putting it back together requires some finesse. You put the slide back on from the muzzle, pull back, engage the lock and install the take-down pin. You will also need to push that lever back before closing the slide or will not be able to operate your gun. It's a learning curve, but not a deal breaker by any means. I use Rem Oil and Tetra Gun Grease on mine, but other lubricants work fine. Read the instructions and you can't go wrong.

As for ease of carrying, I had no issue with carrying and no one made mention of any bulges under my shirt in an in the pants holster. For sure, there's the crowd who believes that a gun should be comforting and not comfortable. I take issue with that. First of all, there's no comfort in having to shoot anyone regardless of how justified you are. For most of us, the uncomfortable or hard to use piece is the one we won't carry. This great if you can afford more than one gun (and the more, the merrier), but for most of us we only have one gun. With that under consideration we need to have something that won't relegate us to wearing a hoodie or carrying a fanny pack, or even worse, a handbag. The SR9c is very concealable this side of nudist colony without being a pocket gun. With the rounded edges (Ruger did their homework on this one) it won't print under a shirt like the Sunday edition. Part 3, Lord willing, will be about how it shoots on the range. Maranatha!
Posted by Walter Grace at 9:26 PM No comments:

After much soul searching and a conversation with my dad, I elected to trade in the PX4 for a new gun. The problem was that the gun, capable as it was did not meet my needs and in fact was a pain to concealed carry. Initially, I considered buying a pocket gun in a .380, but this is trading one situation for another. Pocket guns, though all the rage right now, are also a compromise in accuracy and in the case of .380 ammunition are more expensive and have less stopping power than a 9mm Luger. My hands are on the large side, making getting a handle on 12 ounces of steel and plastic trying to jump out a challenge. I've fired a Walther PPK in a .380 and know what I'm talking about. These kick more than an appropriately sized (for my mitts) .45. Pocket pistols, because of their cost factor, do not usually include an extra magazine. In the 9mm I was considering (A Ruger Lc9) that magazine was $50 for a $400 gun. Not a good deal in my book.

I also considered a Taurus Millennium 111(9mm), a Taurus TCP (.380) and a Ruger LCP (also .380). I didn't consider Kel Tec, Sig Sauer, Smith and Wesson, or Glock because of their high (in the case of the Sig, astronomical) cost. These are good guns and to those who own, enjoy and protect themselves with them more power to you. However, I never wore Jordache as a kid and today make things last as long as I can. A gun to someone like me is like any other tool, and I look for attributes more than a name brand. In spite of my literature teacher, here's a list in no order.
1. Made in the United States is a huge plus.
2. A good reputation among users and experts alike. (Beretta has issues lately, including the police officer who I turned my paperwork to had a lot to say).
3. A manual safety is very important, as are passive safeties, a trigger safety, and for the bunny huggers, a magazine disconnect.
4. A striker fired, rather than a hammer fired system (the trigger reset on the PX4, being a SA/DA was terrible and didn't always allow the hammer to fire. This could get you killed in a firefight.)
5. A stainless steel slide and barrel.
6. Easy to field strip and maintain (the PX4 excelled at this).
7. Weighs less than 2 pounds loaded (PX4 was well over two pounds).
8. Easy availability and low price of accessories (this was a huge sticking point with the Beretta, as they only deal with one wholesaler for volume sales.)
9. Easy to find holsters for, and in my case able to use the ones I have
10. Something I don't have to sell my first born to get.
11. Easy to conceal without a shoulder holster, without protrusions or sharp edges (the safety levers on the PX4 are razor sharp at the tip and drew blood when I pulled back the slide to qualify for my CPL).
12. Accurate and durable.(the Beretta was accurate, but the plastic feed ramp raised concerns).
13. Good looks don't hurt either. (the Beretta was a looker)
The Ruger SR9c is made in Prescott Arizona, and though less than 70 years, had a good reputation for low cost firearms of high quality. They've had their issues for sure, but seem to have taken care of them. The SR9c is packed with safety features, including all the passive safeties, a loaded chamber indicator, magazine lockout, trigger safety and a manual safety. It is striker fired with a consistent 5 pound trigger pull and reset. Unlike the Beretta I traded, the SR9c has a stainless steel slide and barrel and a lower center. Field stripping it is a little more complicated and requires a pen or snap cap. I figured it out in about five minutes reading the manual though. With the ten round magazine loaded, it weighs 1 3/4 pounds (I would use this one on the gun) and about 2 pounds with the 17 round one. Even with the 17 round, there are no sharp edges to print through clothes. Magazines are cheap at about $30 to $35 apiece with shipping as is the price of the gun. List price is $500, but I got mine before trade for $430 at Gander Mountain (my final price is none of your business). I'll continue with part 2. Maranatha!

Posted by Walter Grace at 8:53 PM No comments:

So what is a meg-ohmmeter? Only the most awesome piece of equipment the Good Lord allowed air-conditioning techs to possess. Besides the manifold gauge and the multimeter, this is one tool that should go on every air conditioner call. You can spend anywhere from $89 to in excess of $5000 for one of these. However, for residential applications, the hand held Supco M500 is adequate for the job at hand. "At hand?" you ask, I've put the cart before the horse. My bad.

A residential air-conditioning system, minus furnace or air handler has 3 main parts. Those are the evaporator, the condenser, and the line-set. The evaporator, or "A" coil lives over the furnace or air handler and picks up the heat from your domicile. The line-set carries the refrigerant (which also carries the heat) to the condenser. The condenser also houses the outdoor coil, fan assembly, a switch, capacitor or two, as well as the pump to move the refrigerant. This pump is called the compressor, and it not only moves the refrigerant around, it also moves oil around in an effort to keep itself cool and wear free as possible. If the oil becomes contaminated from moisture, the result is that it may form an acid. This sounds ominous, and it is.

There are three windings on a compressor: start, run and common. All of them need to be insulated from ground to allow it to run through the bath of oil it's in, or it will trip the breaker or blow the fuses. Acid attacks the insulation on these wires and allows them to ground out. The condition of this insulation is measured in Meg-ohms and measured with a meg-ohmmeter. The lower the number, the poorer the insulation and more likely the compressor will fail. 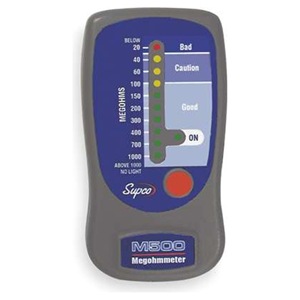 Again, you can spend a lot of money on one, but these are difficult to read and even harder for the customer to understand. I am shamelessly endorsing the Supco M500 for its compactness and ease of use. At about $125, it's fairly inexpensive. The leads are stored inside the meter and it has a soft case. It fits in a tool bag with no problem, so it's ready when you need it. You can hook this up to the compressor lugs, one at a time with the black on a convenient ground. To measure, push the button and read the scale. If one of the green L.E.D.s lights up, the compressor passes the test. This doesn't mean the compressor is "good" but that you need to investigate further. If the one of the yellow L.E.D.s light up, the compressor is failing. If the red light is on, the compressor is junk.

An alternative to tearing the condenser apart to reach the lugs is to use the wires and ground to the frame. You also have the added benefit of not breaking off one of the lugs trying to get the leads off. If you're unfortunate enough to do this, it's "bye bye compressor".

The meg-ohmmeter is a useful and necessary tool in evaluating and diagnosing compressor failure. With the price of equipment today, customers demand accuracy as few are willing to pay for maybes. Even on 20+ year old equipment that needs to be replaced, most want to wait it out a year or two. A meg-ohmmeter is essential in reinforcing your argument to replace, or repair the equipment. It also helps provide you, your employer and the customer peace of mind. With all of this to consider, you can't afford to not have this in your tool bag. Maranatha!
Posted by Walter Grace at 2:45 PM No comments: