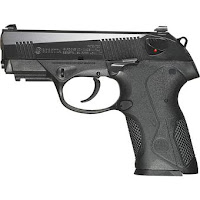 Yes, this is the handgun that I've saved up for months. I chose it over a Cobra FS380, a Hi Point C-9 as well as a Ruger SR (in a .40 caliber), a Glock 19 as well as a plethora of other pistols of varying shapes and sizes. For the price, I could have bought 2 Hi Points and a CPL class, or 1 Hi Point, 500 practice rounds, a CPL class and a CPL. The main reasons I got the Beretta was that it had a safety/decocker and fit my hand. The slide is easy to operate and pull back, as well as unlock with moderate pressure. The latter part is important to me because I have arthritis in my hand. I also wanted something simple to field strip and maintain.
When I got it out of the box, the first thing I noticed was the case had a round plastic piece inside. This was because the case it came in is so thin that this was the only economical way to keep it from being crushed on the boat ride here (A new case can be had for less than $10 without this problem). Included as well as the gun were also a legal disclaimer (thank the Massachusetts attorney general), instructions, a cable lock (trigger locks don't work great on this gun, the cable lock is still a pain to lock though), an extra magazine and loader (a necessity as the springs are strong), two back straps (the third one is on the gun, as is a magazine) and a cleaning kit.

The first thing you have to appreciate (positive or not) is the mass of this gun. Loaded with 15 rounds of ammo, (Massachusetts has a 10 round limit on pistols as of this writing) it tips the scale at 2 pounds 2 ounces or 34 ounces. It's not a boat anchor, but this isn't a gun you want to wear on Sansabelt slacks or running shorts. It's also a bit thick for inside the waistband, but can be done with the right holster (try Uncle Mikes). Because of the size and mass, carrying in the pocket isn't an option. Better opt for a Nano if you want a Beretta in a 9mm as even the subcompact in this family is a bit meaty.

The balance is spot on, even with the magazine empty and a polymer frame. Removing the slide for field stripping doesn't require pulling the trigger as there is a catch just above the trigger guard. This is recessed to prevent the slide from separating from the frame during presentation, but deliberately removing same is still quick and easy. There are only three parts to remove once the slide is off and they're very intuitive getting them back together. You can't put anything in backwards and you don't even have to hold the slide upside-down to get it back together with the frame.

The trigger pull in double action is crisp, but heavier than in single action. This is to be expected with any gun of this construction and the PX4 doesn't disappoint. The trigger guard is large enough for even gloved hands and there's just enough grip to get all your digits on the frame. Originally, Beretta had Tritium (night) sights on this gun, but perversely, they switched to white dot sights. The picture is good, but this could be a challenge to use in low light. To switch to night sights on this gun, you will need a special tool to get them off and on, or take it to a gunsmith. The tool costs about $100 from Beretta and the sights are about $100 as well. This is a lot to spend on a gun that now retails for about $600 (I got it for substantially less than that). Personally, I'll go ahead and take this to a gunsmith if need be, or find a glow in the dark paint if this becomes an issue.

The slide lock is larger than on many guns this size and could be an issue with some holsters. However, this isn't an issue with mine as of yet. If you've owned a piece with a safety/decocker on the slide, this one could be confusing. The European guns I've fired and seen have the safety up for fire and down for "safe". This is backwards to the American gun that have the fire down. Not a deal breaker, but something to learn if you decide to carry it. The magazine release, as with everything else, is ambidextrous, but this needs to be switched from one side to the other. I haven't tried it, no need to as this is set for a right handed person. Southpaws can reset this with a small punch. Operating the release requires you to arch your thumb a bit. This can be a challenge for those with smaller hands. The positive side is that you won't be as likely to accidentally release the magazine in a fight. This is why you need to practice with ANY gun you intend to carry or use for home defense. Larger buttons for this, as well as smaller ones for the slide release can be had from Beretta. The present size is more than adequate for most shooters.
Speaking of hand size, those back straps are there to adjust for same. The one already on the frame will according to Beretta, fit 80% of shooters. Thus far, as I haven't fired it yet, and that one fits fine. The larger or smaller ones should help those with larger or smaller mitts get a grip. I've read some reviews of people tearing their fingers trying to operate the safety/decocker. The only conclusion I can come to is that they may have a defective gun because the control doesn't have any sharp edges to speak of. Flipping it up for "fire" is easy, but putting it into "safe" requires extending your thumb slightly or using your other hand. My first impression of the PX4 Storm Compact is positive to say the least, but the proof is at the range. As soon a I get some rounds through it, Lord willing, I'll follow up. Maranatha!
Posted by Walter Grace at 6:29 PM

I enjoyed the write up very well done. You will like the compact PX4 it is very accurate and recoil is very easy to handle. I also have the full size PX4 also. Enjoy your new toy.

Good review they are great I know by now you know how good they are.