From Customer to Con Game.

Friday came and went and the car was fixed for less than half expected price. As it was, the front wheel bearing and drive axle were doing the clicking because the axle nut couldn't tighten all the way. The bushings on BOTH sides of the back were also shot, but the Rendezvous is back in business. Due to working another 8 to 8 day, this didn't get picked up until nine-thirty. This was one con game that could have cost me over a grand or so. This will be the beginning of a long relationship between me and Foreign Car Service out of Mulliken and the end of it with Quality Auto Service who was so inclined to make a buck.

When I work on something and it messes up, it's going to be made right. We never have time to do something right the first time, but we always have time to do it over. Six months ago, I was sent to a house in Lansing because the furnace had been under water and ruined the blower motor. Despite my best efforts to free it up, the motor was toast. The furnace was also not far behind. Because this guy had little money, I put in the motor and got the thing working again for $400. This was about a fifth the price of a base 80% model, but either way the basement needed to be fixed to keep the water out or the same problem was going to happen again.

Fast forward to September 16th about 7 p.m.; the customer came into the office and set up an appointment to get his furnace looked at because the blower motor I installed had failed. Working my way down to the basement, I noticed that it was still wet and muddy. The blower would indeed not start, but neither would the burners. I checked for power, with the customers alcohol enriched breathe over my shoulder and in fact, there was power. The customer complained the motor had failed, so I tried spinning it and in fact it was stuck. To make a long story short, I removed the blower and freed it up. 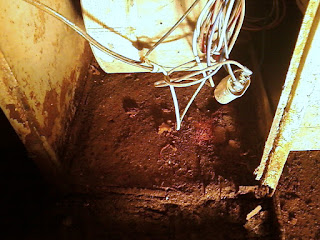 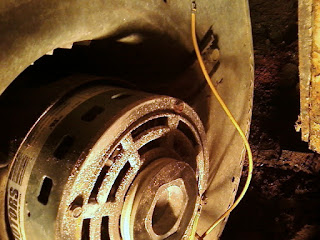 The photo on the left is out of the Montgomery Wards furnace in the house in question. There is still a lot of mud in the cabinet and as you can see on the left, this is what happens to a motor that has spent time in a moist, if not wet environment. The cabinet was so rotten that it could crumble under the weight of the heat exchanger. If this were me, the furnace would never gotten a new motor six months ago. 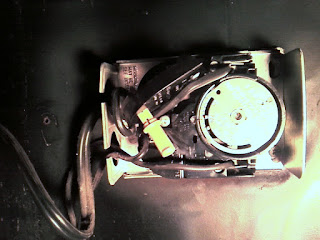 I opened up the fan limit control and the plastic casing fell apart. This is made of Bakelite, a high impact plastic which is also heat resistant. However, it isn't heat proof. The customer blamed me for this part breaking, but the metal around it has what's called a hot spot. This is the result of metal being under extreme heat without the benefit of a working blower. You can also see that the pointer is on the 100 degree mark which is also the off point. This is also a result of overheating the limit control. It should be all the way to the right.

Needless to say, I don't argue with idiots or drunks. At the advice of my boss, I took these pictures and more on 4X6 prints to take to him tomorrow. I can understand having no money, but when someone tries to con or accuse me, the charity ends. This furnace should have never been worked on, but replaced and the basement waterproofed. Better to have a horrible end than horror without end. Maranatha!
Posted by Walter Grace at 11:12 PM

My boss did at least back me up on this, but told me I should have taken more pictures of the basement. What can I do with a drunk staring me down; knock him out?