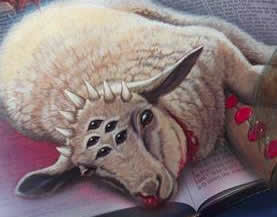 Revelation 5
1And I saw in the right hand of him that sat on the throne a book written within and on the backside, sealed with seven seals.
2And I saw a strong angel proclaiming with a loud voice, Who is worthy to open the book, and to loose the seals thereof?
3And no man in heaven, nor in earth, neither under the earth, was able to open the book, neither to look thereon.
4And I wept much, because no man was found worthy to open and to read the book, neither to look thereon.
5And one of the elders saith unto me, Weep not: behold, the Lion of the tribe of Judah, the Root of David, hath prevailed to open the book, and to loose the seven seals thereof.
6And I beheld, and, lo, in the midst of the throne and of the four beasts, and in the midst of the elders, stood a Lamb as it had been slain, having seven horns and seven eyes, which are the seven Spirits of God sent forth into all the earth.
7And he came and took the book out of the right hand of him that sat upon the throne.
8And when he had taken the book, the four beasts and four and twenty elders fell down before the Lamb, having every one of them harps, and golden vials full of odours, which are the prayers of saints.
9And they sung a new song, saying, Thou art worthy to take the book, and to open the seals thereof: for thou wast slain, and hast redeemed us to God by thy blood out of every kindred, and tongue, and people, and nation;
10And hast made us unto our God kings and priests: and we shall reign on the earth.
11And I beheld, and I heard the voice of many angels round about the throne and the beasts and the elders: and the number of them was ten thousand times ten thousand, and thousands of thousands;
12Saying with a loud voice, Worthy is the Lamb that was slain to receive power, and riches, and wisdom, and strength, and honour, and glory, and blessing.
13And every creature which is in heaven, and on the earth, and under the earth, and such as are in the sea, and all that are in them, heard I saying, Blessing, and honour, and glory, and power, be unto him that sitteth upon the throne, and unto the Lamb for ever and ever.
14And the four beasts said, Amen. And the four and twenty elders fell down and worshipped him that liveth for ever and ever.

When I went to Sunday school, we were always told about this book with seven seals in it. For the longest time, I thought this was the Bible itself, but this isn't the case. Long before bookbinding, there were scrolls that were sealed to protect their contents from prying eyes. In fact removing a seal off of a scroll not meant for you could result in a death sentence. So if you weren't worthy to open the seals, you weren't able to open the scroll and look inside.
This scroll is the title deed to the earth itself and as we all know, or should know that Satan is the rightful owner of this planet because Adam and Eve chose sin over the Lord. We were supposed to be gods of this earth, but because we sinned, we made Satan of that title (this upsets my mom to no end when I say this, but it does me too).
Because no one was worthy to open these seals, John was upset and given the state of the planet who could blame him. However, in verse 5, one of the elders told John that the Lion of Judah and the Root of David was worthy to open these seven seals. So what's with the lamb with seven horns and seven eyes that looked as if it had been slain. That lamb is Christ Himself and the seven horns are His perfect and final authority (horns are used as a symbol for power or authority throughout the book and the Bible). The fact that this Lamb as seven eyes also shows His perfect vision and knowledge (seven is the number of perfection).
Now I'm not really planning on seeing a literal lamb with seven horns and seven eyes opening a scroll, but I do intend on seeing Jesus opening each and every seal to reclaim the earth. I also intend to be falling on my face every chance I can to love and worship Him. Love in Christ.
Posted by Walter Grace at 7:28 PM