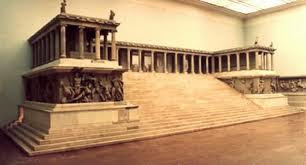 First of all, I realize that Jesus could have came back and got His church, had the Marriage Supper of the Lamb and got the elders in place by the time I got to part Five. Forgive me, brothers and sisters. I have been busy and have have had the usual stuff to tend to on this blog. As always, onward Christian soldiers.

12And to the angel of the church in Pergamos write; These things saith he which hath the sharp sword with two edges;

13I know thy works, and where thou dwellest, even where Satan's seat is: and thou holdest fast my name, and hast not denied my faith, even in those days wherein Antipas was my faithful martyr, who was slain among you, where Satan dwelleth.

14But I have a few things against thee, because thou hast there them that hold the doctrine of Balaam, who taught Balac to cast a stumblingblock before the children of Israel, to eat things sacrificed unto idols, and to commit fornication.

15So hast thou also them that hold the doctrine of the Nicolaitanes, which thing I hate.

16Repent; or else I will come unto thee quickly, and will fight against them with the sword of my mouth.

17He that hath an ear, let him hear what the Spirit saith unto the churches; To him that overcometh will I give to eat of the hidden manna, and will give him a white stone, and in the stone a new name written, which no man knoweth saving he that receiveth it.

Pergamos, or Pergamum was an important political and religious center in what is now Turkey. The large and grotesque altar is also known as the throne of Zeus (the egomaniacial god with the thunderbolts). If you read the descriptions of Zeus, he is a dead ringer for Satan. This altar is also known as Satan's throne. No wonder this is where many Christians met their demise, including Antipas whom Jesus named.

However, the issue Christ had with this church was because they were tolerant of
the Nicolaitanes, whose name suggests a leadership over the laity. This group also believed it was fine to sin as long as you confessed your 'sins' to a member of the clergy. The problem Christ had with these clowns is because they strove to glorify man and not Him. This same group also practiced Baylonian religion that was a huge stumbling block for Israel.

The message of "Hidden Manna" is also the title of one of my dear friends, Tracie Justice and this is for good reason. Christ promised this church a fresh start and being well taken care of if they would only repent. Manna is what the Israelites ate in the wilderness for 40 years and sustained them through some tough times. Christ is compassionate and the only One who can forgive sin. He will sustain you if trust in Him. Blessings.
Posted by Walter Grace at 9:49 PM