A Day of Thanks and Coffee... 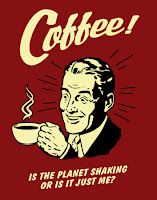 After writing about biting the bullet and being couped up in this apartment for what seems a small eternity, a small miracle happened. No, it wasn't a job offer or donated car, but it was no less important. Not to complain, but this has been the norm for nearly 7 months since my last layoff and compounded by my car being out of commission and needing $10,000 in repairs at this point. But I digress, as this was a very nice day.

The sun was shining as it has been all week; no snow to speak of. The remnants of the white stuff, though hanging on have cleared all but the most shaded part of the sidewalks and the promise of spring all but assured. My mother also called, well I called her and after running my stepfather to work, came to visit. Cleaning the apartment a bit, she came over and we spent nearly a half hour at Beaners (I know it's Biggby, old habits die hard and this is not a bad one). We talked, I drank their wonderful coffee and ate a delicious bagel with premo creme cheese. She drank a latte and even met one of her friends from JCPenney.

We talked with her and she made mention about her new boyfriend, a youth minister and all around good guy. She, like us is a Christian. I'm especially proud of her that she chose someone of this caliber. This is like a reverse Dr. Laura moment and proves that women can and should feel they deserve better and expect this in kind. Kudos!

After our trip to Beaners, we went to Big Lots and scrounged around for awhile. She was trying to find a case for her clippers (she's a master designer/hairdresser and has been for 20 plus years. I'm proud of her too). We found a tablecloth, easter stuff and a picture frame. A stop to Goodwill produced a pair of shoes for my older son and another picture frame. One to Horrock's some flowers. Yes it was mundane on the surface. However, for someone shut in, this was an absolute godsend.

Never underestimate the importance of such an act of kindness. This is far more important and feasible than a trip to a theme park. Time is the commodity well spent, more valuable than anything else. For this I am grateful.
Posted by Walter Grace at 10:50 PM