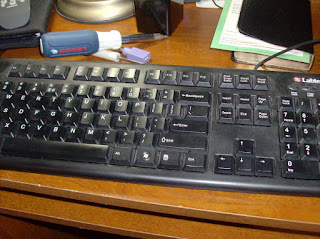 Let's face it, keyboards are a dime a dozen. They cost about $15 to $20, but some of the more specialized ones are about $40 to $60 or more, Ouch! Ideally, you're not supposed to eat or drink around these things, but over time crumbs, food and even the oils on your hands will contaminate even the best hardware and render it useless. Because I write a lot, this meant that I would be replacing a keyboard every six to nine months; a year if I was "lucky."
The keyboard above is a Labtech, but any basic unit will be the same. I have one for each computer and the one I just cleaned was so contaminated that the keys stuck. The object is to turn it over and remove the screws holding the two halves together. There were no less than 24 holding this one together. I removed the printed circuit and the circuit board from the half with the buttons and inspected them for moisture or acid (cola) damage warranting a replacement.
None found, remove the silicone insulator from the half and inspect this for cola, oil or dirt. It it's clean, leave it alone and set it aside. The buttons should be removed from the keyboard, but only remove the space bar, enter or return key, backspace, tab, caps lock, windows, control, alt, and \ keys. The rest will be a pain to put back in and it's just unnecessary.
Once all of the electrical stuff is off, take the buttons and keyboard half with the buttons to the sink. One with a sprayer works the best. Use a low-sudsing, mild detergent for dishes and squirt some into the keys and lay the stray buttons into the sink strainer (not the garbage disposal side). Spray water into the keys and allow the crud to wash out where you removed the buttons. Once the suds are out, stop and inspect. Then wash out the backside for a minute. Be sure to use tepid, not hot water. Hot water will ruin the keys. Do not wash in dishwasher as the heat and action of the detergent will make the board brittle, destroying it.
Carefully plug the buttons you removed, taking care to install the metal trapeze-looking hooks into the slots of the bigger ones. An instant or digital photo would be nice at this time, but memory can work too, mine did. Either way, the keyboard needs to be completely dry before socking it back together, lest evil befall you. If the silicone insulator it dirty or sticky, clean this with detergent as well and let it air dry. Once everything is dry; give it at least several hours or overnight, you can put it back together, making sure the cord is threaded the way it was when you took it apart.
The screws may be different lengths, so if there's too much resistance, stop and use a shorter screw. Take your time and once done, plug it in and check it. The results should be a keyboard that's cleaner and easier to use. You'll have saved yourself some money to boot.
Posted by Walter Grace at 8:38 AM